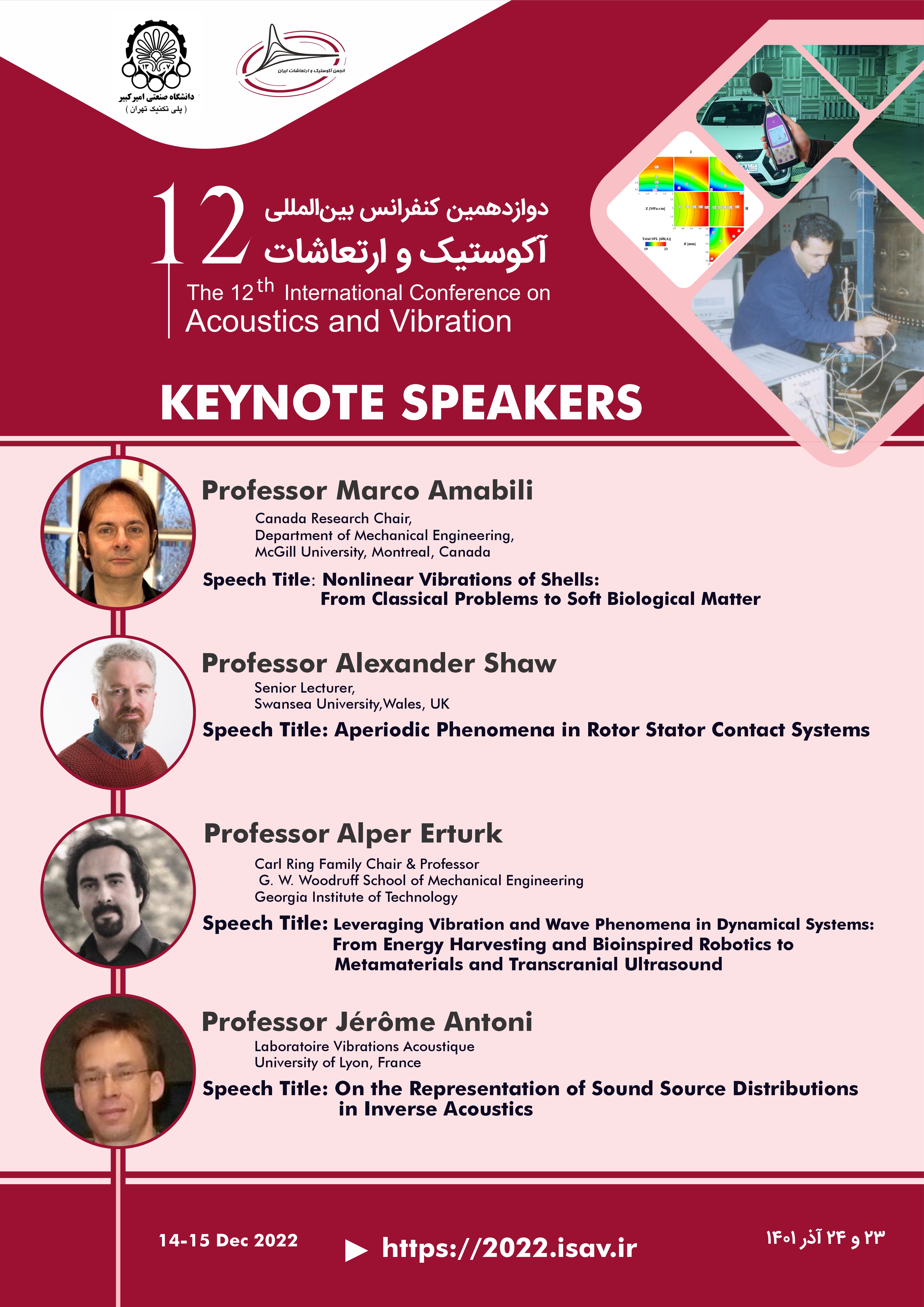 This seminar will focus on nonlinear vibrations of shells made of traditional, composite, and soft biological materials. Starting from classical nonlinear shell theories, nonlinear dynamic phenomena that can be observed in circular cylindrical shells will be highlighted: from softening behavior to amplitude modulations, internal resonance and chaos. Then, in order to deal with thick walls and large strains associated to soft materials, the classical shell theories are modified by including shear and thickness deformations, as well as rotary inertia. Comparison of numerical simulations and experiments for large amplitude (geometrically nonlinear) vibrations of plates and shell structures will be presented and the very large increase of damping with the vibration amplitude will be discussed. This is a little-known phenomenon of fundamental importance in applications. The nonlinear damping will be derived in a very original way from viscoelasticity. The damping model obtained is geometrically nonlinear and the parameters are identified from experiments. Numerical results are compared to experimental forced vibration responses measured for large-amplitude vibrations of different structural elements.

Biological soft tissues are subjected to significant static and dynamic loading, yielding large strains that requires the introduction of hyperelastic and viscoelastic constitutive models. Results for human aortas will be shown and compared to experiments.

Rotating machines form a huge part the engineered world, from aircraft engines to drilling operations. Possible contacts between the rotating shaft and some external stator are known to lead to some very rich, and potentially destructive, dynamic responses. There is a long history of academic studies demonstrating bifurcations, chaotic behaviour, and multiple and isolated solutions. Despite this, a framework that encompasses the diversity of phenomena that is observed seems to be lacking.

This talk shows how, in an isotropic rotor stator system, complex orbits are in fact periodic in the rotating frame, and initiate due to a form of internal resonance. It then shows how this insight can be used to derive an analytical method which can potentially reduce large systems to just a couple of resonant terms. The method is a harmonic balance approach augmented by the method of normal forms. It then discusses how the responses change as the initial assumptions are relaxed to include effects such as gravity and friction, and rigid impacts. It concludes with some ongoing experimental work.

From Energy Harvesting and Bioinspired Robotics to Metamaterials and Transcranial Ultrasound

This talk will review our recent efforts on exploiting vibration and elastic/acoustic wave phenomena in emerging fields and across disciplines for various applications. The first part will discuss examples from the domain of vibration energy harvesting for small electronic components by using piezoelectric transduction in conjunction with concepts from nonlinear dynamics and fluid-structure interaction. Multifunctional scenarios will also be presented, such as combining energy harvesting and bio-inspired actuation in the same robotic platform, as well as concurrent energy harvesting and metamaterial-based vibration attenuation. In the second part, the focus will first be placed on phononic crystal-based manipulation of 2D elastic and 3D acoustic wave propagation. Specifically, in-air sound wave focusing and underwater ultrasonic wave focusing using 3D-printed phononic crystals with tailored microstructure will be summarized for applications including wireless power transfer. Then, ultrasonic power/data transfer to wireless components in metallic enclosures will be addressed along with the use of phononic crystals for crosstalk minimization via bandgap formation between the piezoelectric channels. Examples will also be given on programmable piezoelectric metamaterials with synthetic impedance circuits. Finally, the leveraging of vibrations and guided waves in the human skull will be discussed briefly for purposes ranging from high-fidelity modeling and parameter identification via vibroacoustic experiments to investigating the role and potential use of guided waves in cranial/transcranial ultrasound.

On the Representation of Sound Source Distributions in Inverse Acoustics

Inverse acoustics is concerned with the reconstruction of sound fields from remoted measurements. Of interest in this talk is acoustic imaging, an inverse acoustic problem that tries to map sound sources recovered from an array of microphones. This type of problem involves several mathematical and physical choices, which strongly determine the quality of the solution. A crucial question that readily arises is the proper definition of sound sources, the quantities of interest. Several theoretical results establish that the sound source distribution cannot be recovered uniquely, thus paving the way to different options. The talk will first review the most common choices used in the literature, such as expansions in eigenfunctions of the wave propagation operator, and will next concentrate on the Equivalent Source Method (ESM), which has become popular due to its flexibility. It will then introduce recent extensions of the ESM, such as solutions to account for diffraction, and theoretical cues for using equivalent dipoles instead of monopoles in 2D source representations. Finally, it will discuss some recent works for 3D source reconstructions in aeroacoustics.